This past Saturday, Ryan and I decided to do a little shopping at our local Old Navy & Ulta. Well, I shopped in Ulta…Ryan just sampled all the men’s cologne choices! When we were done with our shopping, it was close to seven-thirty, and we were both hungry.

Burton’s Grill is actually a chain of restaurants, but the majority of their locations are in the New England area with only a handful in the South. We were seated quickly, and our server quickly told us that their biggest goal is to provide freshly-cooked, made-to-order meals. She assured us that if there was anything on the menu that looked good, but we wanted cooked slightly different, the kitchen would accommodate. Next, she asked if either of us had allergies, and Ryan piped up with, “yes, I’m allergic to tree nuts.”

Can. Of. Worms. Opened. But I’ll come back to that.

Ryan and I ordered a large Caesar salad, which they kindly split onto two plates for us. One thing that really stood out to me about Burton’s was that they offer two different portion sizes of almost all of their main entrees, in case you don’t want a huge portion. Our server also brought us bread with some sort of herb butter that was yummy. Give me carbs, and I’ll be your friend for life!

I decided to order their specialty “Maxx” burger (shredded lettuce, tomato, fried onion strings, and the Burton’s special sauce) and Ryan chose the Maple Chicken Sandwich (grilled chicken, Applewood smoked bacon, caramelized red onions, mixed greens, cranberry, and maple dijonnaise). Can you tell that he’s more adventurous than I am when it comes to eating?

My burger really was great—it definitely tasted homecooked, and freshly-made. Ryan’s sandwich was gone in about ten bites, and he seemed very satisfied! The staff also made sure that our food was cooked separate from anything that contained and Ryan’s plate was a different shape so that the staff would know it belonged to someone with an allergy. 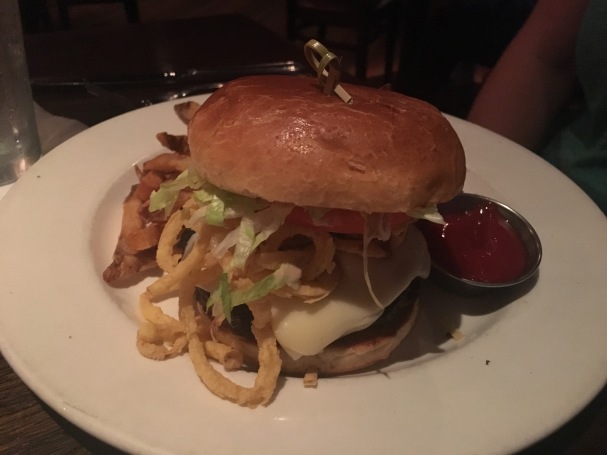 Burton’s also has a loyalty card, and you get points every time you spend money. After you earn so many points, you get a credit for a portion off your next bill.

Now about that nut allergy…the server and manager were both very concerned about making sure that Ryan’s plates and food were not contaminated with nuts. So concerned that when I asked about a certain special desert that had Kahlua and chocolate ganache and something else yummy with a graham cracker crust, I was told that the crust might contain trace amounts of tree nuts that wouldn’t be safe to bring to our table, because of Ryan’s nut allergy.

I wanted to politely tell the server that I often eat nuts, even when Ryan can’t. But then I realized that the key lime pie had graham cracker crust as well, which ruled that out, and then I got a little grumpy!

Overall, Burton’s was good, and if you’re looking for some good food but not too crowded with tourists, this is a great spot to try! They also have a large outdoor patio, and I’m fairly certain pets are allowed out there!