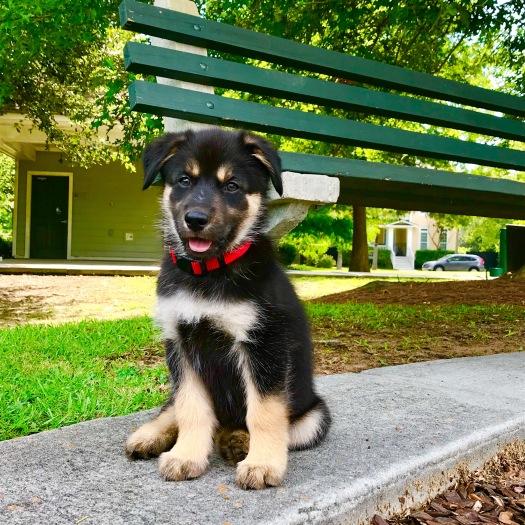 Meet Poppy! She’s the newest addition to our little family, and we are so excited for Goose to have a sibling.

Poppy is a two-month old Ausky—an Australian Shepherd mixed with a Husky. Judging from the current size of her paws, she’s going to be a big girl, but we definitely knew that was a possibility when we decided to get that breed.

So far, Goose and Poppy seem to be getting along well. They wrestle a lot together and play tug-of-war with different toys. Poppy seems to love grabbing onto Goose’s tail. He doesn’t seem to love when she does it, though! Once they play for a while, Poppy passes out. Sound asleep. It’s the cutest. And Goose had been absolutely exhausted for the past two days—probably from playing but also from the excitement. 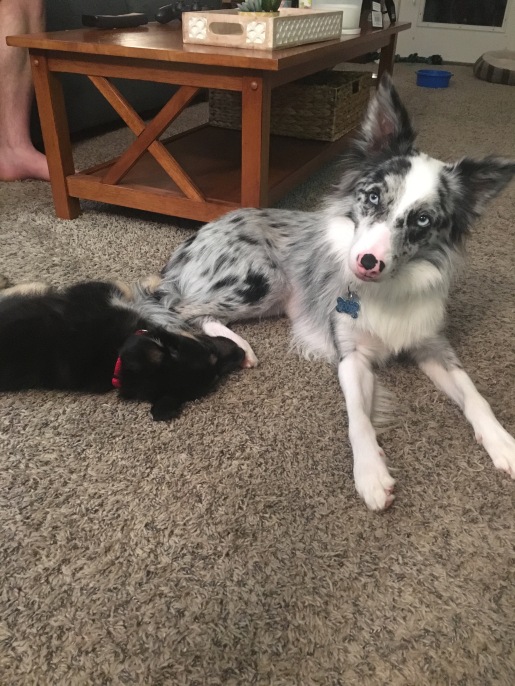 Poppy is not a fan of the kennel, where she stays during while we’re at work and is supposed to sleep in at night. So far, she hasn’t slept in it at night. She’s very vocal, and she let us know that she wants to sleep close to us, out of the confines of a kennel. You’ve probably seen videos of Huskies who throw back their heads and howl…well, let’s just say that Poppy has likely inherited that trait from her Husky mom. But I feel confident that she’ll adapt to our lifestyle in a couple weeks. I’ll be honest—listen up, Mama—it’s a little overwhelming here at the beginning. But it was when we got Goose, too. I’m an anxious person anyways, so I’ll feel much better once Poppy gets her first shots and check-up. Then, we can start to socialize her and introduce her to the ocean!

Now, I’ll address the question that many of you have asked me: why get a second dog? Everyone has told us that it’s added work and expense, it’s one more thing to tie us down, we might as well have kids, etc. Well, to be honest, we wanted another dog. Ryan and I both love dogs, but he has wanted a second pup for months, and it’s something we thought about extensively. A lot of people have asked why we don’t just start our family instead of getting dogs, and I’ll give you the honest answer: we’re not ready for that yet. Neither one of these dogs is to help us get rid of baby fever, either. It’s a personal choice for us to have two dogs. It’s definitely not for everyone!

If you’re on Instagram, be sure to check out Poppy’s new page, poppy_theausky. Get ready to see lots of photos of her everywhere!

P.S. In case you’re wondering, Poppy is named after the character “Princess Poppy” from the animated movie, Trolls.

Hey y’all! I’m Emma Woodham, and my husband and I live in Charleston, SC with our two dogs. I love sharing travel, style, food, and more, so if you enjoy any of those, please follow along! But, even if it looks like I have my life together, I promise you I don’t! I might be almost thirty, but I’m still trying to figure out being an adult. If you struggle with that… join the club!

There was an error retrieving images from Instagram. An attempt will be remade in a few minutes.